Bio:  The world's biggest boob asian pornstar Minka has been lusted after by big tit fans since the 1990s. Her enormous 44KK tits weigh an awesome 13.5 pounds (6.1 kg) each! These days she lives in Las Vegas, Nevada, but she was brought up and raised in Seoul, South Korea. A talented tennis player, Minka recieved a scholarship from her university to play tennis and, after graduating, she won a contract to teach tennis at the US Army base in Seoul. She moved to the US in 1993 with plans to become a professional tennis teacher, but her English was not good enough to pass the USPTA test to become licensed. She was invited to play tennis at the 1993 Asian Olympics in Chicago, and won gold medals in women's singles and doubles. 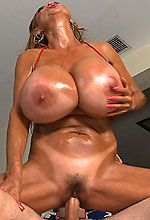